Do you use the North Concord/Martinez or Pittsburg/Bay Point BART station? Live or work in East County? BART wants your input!
With plans to expand East Contra Costa service in 2018, BART is conducting a study to identify projects to improve access to stations for pedestrians, bikes, vehicles and transit. They’ve drafted a preliminary document identifying barriers and proposing improvements, and now they want to hear from you!
For more information or to submit feedback, visit the North Concord to Antioch BART Study webpage.

Monday, September 14, was the first day for BART’s new train schedule, designed to provide crowding relief while the Bay waits for the Fleet of the Future to arrive.  The number of cars scheduled to be in service during the rush hours will be at a record high, with additional improvements provided during non-peak hours.

Pittsburg/Bay Point Line
All rush hour Pittsburg/Bay Point- San Francisco International Airport (SFO) line trains, which operate end-to-end, will be lengthened to the maximum length of 10 cars. These transbay trains also serve riders transferring from the Richmond Line in Oakland.
BART will keep trains long for an additional 15 minutes during weekday mornings on the Pittsburg/Bay Point line to accommodate the increase in riders travelling later in the morning.
Richmond-Millbrae Line
Richmond-Millbrae service will be extended by one hour on weekday evenings, meaning an extra hour of direct service.  The last train will depart Millbrae for Richmond at 9:01pm and Embarcadero at 9:33pm.
Richmond-Fremont Line
All three-car trains will be lengthened to four cars on the Richmond/Fremont line during all non-commute times, marking the end of the three-car train at BART.
For more information, read the full story on BART.gov.

The brochure text is reads:

“BART invites you to join us on the  world’s most sophisticated rapid transit. BART is a space age transit system with over 2,000 people who care about you and it’s the most convenient way to get over, around, and under the Bay Area in minutes.”

The brochure goes on to describe how to access BART and the cost of parking at BART stations (which was free with the exception of the Lake Merritt Station, which would set you back 25 cents per day). Another interesting detail that emerges is in the text the portion about bikes on BART. While all bike restrictions have now been lifted, when the system opened you needed a temporary permit from a station agent to bring your bike on-board during certain hours.

Be sure to check out some of our other posts highlighting the early days of BART, plans that never happened, and what lies ahead.

(For all BART related posts, click on our “BART” tag.) 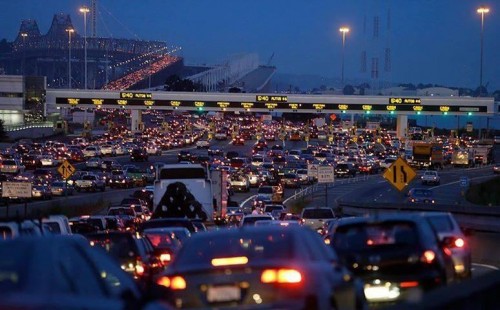 The last BART strike occurred in 1997 and lasted 6 days. Here is a list of transportation resources during a continued BART strike. Standing room only on BART. Photo credit: Michael Patrick
In response to record levels of ridership, BART has unveiled a new feature to its online trip planning – information on the estimated levels of crowding on a train. Now when you use the BART QuickPlanner (also accessible in mobile form) it will show an icon with three heads, two heads or one head indicating “heavy crowding expected,” “moderate crowding expected,” or “light crowding expected,” respectively.

Note the icon with three heads indicating a crowded train. Image via: BART
The crowding level feature is also intended to provide guidance to bicyclists since even outside commute period blackouts bicyclists are instructed to only board cars that “can comfortably accommodate you and your bicycle,” as outlined in BART’s bike rules.
It should be noted that the crowding level estimates are not real time but based on historic data patterns so it’s still best to use your best judgement when boarding BART with a bike.  However, BART’s web team worked closely with BART’s scheduling department to coordinate the new feature to make sure the feature is as accurate as possible. According to Timothy Moore, BART’s website manager,

“Although the data is not real time, the historic data we’re using is generally predictive, and customers will be able to see which trips are less crowded than others.”

To read more about this much welcomed feature, head over to BART’s blog or Inside Bay Area.

San Francisco is full of hustle and bustle. Have you ever wondered what that looks like through the eyes of public transit?
Youtube user SLT Transit put together a time-lapse video of transit activity over a typical day in San Francisco that demonstrates through its mesmerizing patterns how vital public transit is to city’s transportation system. Check out the video below: