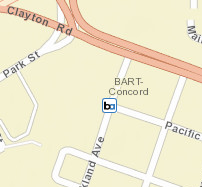 BART has begun phasing out free parking at the few remaining stations where it exists. On Monday, October 27, paid parking ($1 per day) went into effect at the Concord BART station, with the North Concord, Coliseum/Oakland Airport and Hayward stations soon to follow.
According to BART officials, the move to paid parking is necessary to cover costs. The official estimate is that it costs an average of $1.33 per day to maintain, operate and police each parking space in the BART system.
The North Concord BART station will make the move to paid parking on November 12. BART plans to transition Oakland Coliseum BART on November 17 and Hayward BART on December 8.
Parking fees vary by station and can be paid by cash, Clipper Card or a BART Blue Ticket. It’s still free to park at all stations on weekdays after 3 p.m. and on weekends and holidays.

BART officials today excitedly unveiled a test train for the 3.2-mile elevated tramway connector from the Oakland Coliseum station to the Oakland airport that’s scheduled to begin service in the fall. The Oakland airport connector train will enhance access to the airport using BART.
BART officials said the fares are expected to be roughly equivalent to the current $3 AirBART buses.   The connector, which will travel at about 30 mph, will run above Hegenberger Road and replace the current AirBART buses, which drive through nine intersections on local streets. The tramway travel time between the Coliseum BART station and the Airport will take approximately 9 minutes and depart every 4 minutes.  Compared to the current 20-25 minute AirBART bus trip, that’s quite a time-savings.  “There will be a guarantee of the time that will be involved,” BART General Manager Grace Crunican said.
Four three-car trains will operate on the connector, with each train able to carry up to 150 passengers. Tom Dunscombe, the project manager for the connector, said the trains will be light and “elegant” because they won’t have motors, as the motors are in the wheelhouse. Dunscombe said the connector will be “really reliable,” with a projected on-time performance of 99.5 percent, because there will be redundant motors and gearboxes. He said if the trains become crowded, BART will have the option of adding a fourth car to the trains in the future. Full story.